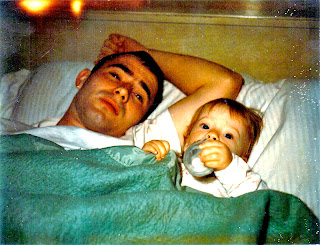 I am my father's oldest child. I was born when he was just eighteen years old. There were many years when I just didn't understand him, but I don't think you really begin to identify with your parents until you have children of your own. How scary it must have been to be the father of four children by the age of twenty-five. I really cannot fathom it.

My Dad was never one to raise his voice. He was always so patient. He took me to my first concert at twelve. I don't remember who the singer was, only that it was just the two of us. With three other siblings, my father's undivided attention was a rarity.

I also remember riding with him in his Ford Falcon that he purchased brand new in 1965 with money he earned from his paper route and his job as a bus driver. The car broke down and it was terribly hot. I remember sitting on the side of the road, but I knew everything would be fine because I was with my Daddy.

He used to sing "Anything you can do, I can do better" and many other songs. My brothers think I'm crazy when I tell them about the father I knew. They don't remember, but I do.

There are many things my father taught us, but he always said, "Winners never quit and quitters never win."

I haven't always understood how lucky I was to call him my Daddy, but I do now. I'm so thankful to have him as my father. I've been through a lot of tough times in the last few years and he's always there, offering support and encouragement. I am a lucky girl to have such a wonderful father.

My brothers love to tease that Father's Day is the next best holiday to Christmas. I was talking to my Dad the other day and said something about my brothers' theory. He laughed and said I should remind them to remember their father. So Randall, Dennis, and Murph — get our Dad a great present from each of you. Of course in my brother, Dennis' defense he usually does have Dad a gift thanks to his wife, Danielle.

And what is my gift to my father? I'll give you a hint. You can hit it with a golf club.  I bought Dad something different one year that I thought was special. While he appreciated it, I could tell he was just a little disappointed that it wasn't golf balls.

Fried okra and chocolate cake are two of my Dad's favorites so guess what we're having for dinner?

Fried okra is really easy to make although it can be a bit slimy. If you don't understand this, you will.

I usually start with about a pound of okra.

You cut the tops and bottoms off and slice the rest into a quarter inch rounds. Wash the sliced okra off, but be prepared it will be slimy. Blot it with a paper towel. Lightly dust it with a little flour. Add cornmeal with salt and pepper.

I like to put mine in a bowl, cover it, and then shake it furiously until every piece is coated with cornmeal. Heat some cooking oil and cover the bottom of the skillet with okra. Cook until golden brown. I usually cover a plate with paper towels to absorb the excess oil.

You might want to hide it while you finish the rest of the dinner, or most of your fried okra will be gone if your family is like mine, swiping a piece or two here and there until most of it is gone.

Posted by Connie A Thompson at 6:00 AM