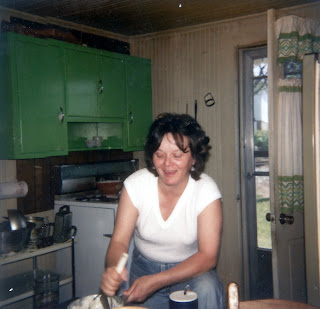 Mashed potatoes were almost always present on my grandmother's dinner table for Sunday dinner. I love this picture of my Mom making mashed potatoes. She just looks so happy and that woman could make the potatoes so smooth and creamy with only the potato masher, maybe there is a more culinary adept description, but for us it was called the potato masher.

One day after he got his own place, my son called me wanting to know how to make mashed potatoes. Seems he was tired of the flakes from the box.

I explained how he was to peel the potatoes, cut them into cubes, and then boil them until they were soft. Then you strain them, add salt and pepper, butter, and milk. I cautioned him to add the milk slowly. You can always add a little more, but once you have too much, well there is no going back. He called me later that evening amazed at how easy it was. So if a young man, barely out of his teens whose culinary experiences consist of frozen pizza and hot dogs can make mashed potatoes, I think just about anyone can.

One added piece of advice, you can substitute a hand mixer for the potato masher. It makes the potatoes smooth and creamy. My potatoes tend to be lumpy unless I use the mixer. I've not mastered the potato masher the way my mother did.

When I first selected this photo, I was just focused on my mother. It was only afterwards I realized how dingy my grandmother's kitchen appears in the photo. But for me, it was always a place of comfort, warmth, and happiness, a place where the whole family came together. Later as a Mother's Day present for her, we did paint her kitchen and install new cabinets. Grandmother was so excited with the remodel. As a child, I couldn't comprehend, but now I see.
Posted by Connie A Thompson at 8:18 AM