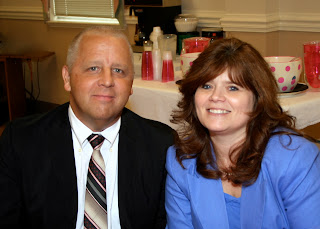 Tomorrow would have been our fourth anniversary, but we never made it to our first. My husband, Mike was diagnosed with cancer in March of 2008. We were married on May 10 of that same year.

Mike was a man, who always took his time and did not make rash life decisions. He even had trouble picking out laundry detergent. He would compare brands, prices, and claims before making his final selection. We had been dating for a couple of years and we thought we had all the time in the world, there were no hurries. We had both been through difficult divorces. But when you get that kind of diagnosis, you reevaluate everything.

One evening, he called me outside. We sat on the back porch, one of his favorite places. He told me he knew things would get bad and since I had nursed my Mom through lung cancer, he would understand if I didn't want to go through that again. He told me he would not hold it against me if I left. And in that moment, I knew I was exactly where I was supposed to be and I had no intentions of leaving him to go through it alone.

"I don't know how much time I have left, but I do know that I want to spend it with you. Will you marry me?" he said.

And of course I said yes. He apologized for not getting down on one knee. We married in between his chemo treatments. Two days before the wedding, he was so sick we thought we would have to postpone the wedding. The night before he wanted hot dogs for supper. If he could eat that, we could definitely get married.

Anniversaries, birthdays, holidays, and other special days are difficult when you lose someone. But tomorrow, I will remember Mike's laugh, his love of black coffee, and that smile he seemed to have just for me. I'll also say a prayer of gratitude for I am thankful for the time we did have together.
Posted by Connie A Thompson at 6:00 AM