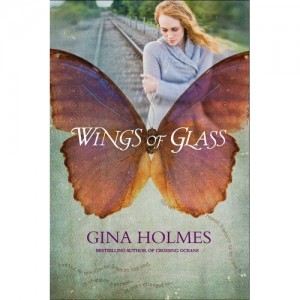 "Why doesn't she just leave?"

I've heard so many people say that about women in situations of domestic abuse. Somebody is belittling you, threatening you, and causing bodily harm. Why would anyone stay in that situation?

Loss of confidence. Low self-esteem. No feelings of worthiness. No money. Fear.

Those are just a few of the reasons why women might stay in those situations.

Penny Taylor is the heroine of Gina Holmes' Wings of Glass. The only problem is that she doesn't know she is the heroine of her own life story. As a shy teenager, she immediately becomes enthralled with Trent. He's so handsome, so worldly, and he pays attention to her. He convinces her to leave her family and marry him. She's cut off from the only world she's ever known. She assumes that her family no longer wants her since they did not approve of Trent.

The honeymoon is quickly over. Trent doesn't want Penny to work so she stays at home keeping house and praying that she will be able to make Trent happy. A kind lady from the local church stops by, but Penny pushes her away. She's afraid of how Trent will respond. He doesn't want Penny having anyone over.

Trent is hurt in an accident at work and loses his sight. It quickly becomes apparent that he has been having an affair, but Penny finds out that she is pregnant. She is sure that God will heal her marriage. Since Trent cannot drive, Penny is free to go to the grocery store. She has the opportunity to get out of the house without him.

She stumbles upon a job opportunity - cleaning houses. She works with one woman, who is also pregnant. They commiserate on their conditions, but Penny is cautious about revealing anything about Trent. It doesn't take long for Penny's new friends to realize that Penny and her unborn child are in danger.

Once many years ago, I was a victim of domestic abuse. Thankfully my situation was not as severe as Penny's, but my family and friends rallied around me and helped me and my children out of that situation. As I read Wings of Glass, all I could think was that could have been me.

Gina Holmes is a master storyteller and I've added her previous novels, Crossing Oceans and Dry as Rain to my reading list.

Gina is featured on today's She Reads blog post.
Posted by Connie A Thompson at 8:25 AM