Review: And Then I Found You by Patti Callahan Henry 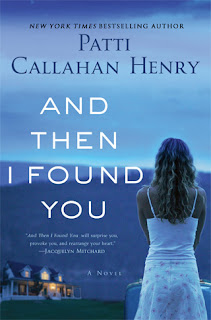 A Patti Callahan Henry novel is like having dinner with a good friend. You laugh, you cry, and you get caught up in the story.
Patti Callahan Henry’s latest novel, And Then I Found You begins with thirteen-year-old Katie Vaughn on the first day of spring, a day of new beginnings, the day that will change her life. Every year, Kate continues to celebrate spring by doing something new. And every year, Kate receives a letter from Jack, her first love, the boy who gave her that first kiss on the first day of spring.
Now at thirty-five, Kate runs a successful boutique. She’s found an engagement ring hidden in her boyfriend, Rowan’s bedside table. She should be elated, but she’s scared. Kate has a secret that her boyfriend doesn’t know. Maybe if she can see Jack once more, she can finally move on.
The story is revealed through two point of views and follows Katie from her youth at thirteen through 2010, where the reader finds an adult Kate still grappling with the effects from a decision she made in her youth.
I met Patti last year at the SC Writer’s Conference, where she was the keynote speaker. I was lucky enough to have dinner with her. She shared with us the plot of her forthcoming book. The idea for the book originated with her family’s past. Her sister had a baby she put up for adoption. Through the wonders of social media, mother and daughter were reunited many years later.
And this is where the idea for the story began. I think all writers begin with some thread of the truth that evolves as they answer the question, what if?

If you want to know more about the story behind the story, Friend Request is available on Kindle.

Posted by Connie A Thompson at 6:48 AM

Labels: And Then I Found You, Patti Callahan Henry, She Reads