Sunday Dinner: Happy Birthday to Me and My Brother, Randall

I was only three years old when I celebrated my birthday alone for the last time. My little brother, Randall was born the year I turned four. He did actually miss the actual day, but with our birthdays only twenty-four hours apart, there were many shared birthday parties and cakes.

When we were kids birthday parties were held in your kitchen or your backyard if the weather permitted. There weren't any special decorations or goody bags. You had a cake usually baked by your mother, Kool-Aid, and a birthday present. Sometimes we had ice cream, but not always.

One year, we each had our very own cake. My birthday is the 22nd, while Randall's is the 23rd. On the 22nd, Mama invited all the kids from the neighborhood for cake and Kool-Aid. When everyone left, there was a small solitary piece of cake.

As Randall got ready for bed that night, he was upset. You would think with his birthday to come, he would be excited. After some questioning by our mother, Randall said, "I don't want all those other kids coming to my birthday. Did you see what they did to Connie's cake?"

Mama laughed, but the next day it was just a family celebration, which also included Lisa, our honorary sibling, who lived next door. Randall's cake actually lasted a couple of days.

Today for Sunday dinner, I decided to make one of our favorites, spaghetti and meatballs. And I was nice and made my brother's favorite cake, orange cake with orange icing. 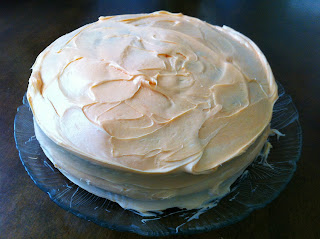 I told Randall he would have to take any cake that was left home with him.

"And I've got a gallon of milk," he said with just a little sparkle in his eyes. "I'll probably gain a couple of pounds though."

I'm sure he'll be enjoying a nice slice of cake and a tall glass of milk as he watches the Amazing Race tonight.

I used to hate sharing a birthday with my bratty little brother when we were kids. But now I think it's kind of cool. Happy Birthday Little Brother!

Come back tomorrow where I'll be reviewing Z, A Novel of Zelda Fitzgerald by Therese Anne Fowler. And it just so happens that we celebrate the same birthday - April 22nd.

Posted by Connie A Thompson at 4:30 PM