They say that there are 5 stages of grief. They are denial, anger, bargaining, depression, and acceptance.
Those may be the 5 stages, but they aren't methodical. They aren't neat. They don't follow a path. You don't simply move from one stage to the next in a neat and orderly fashion. Some days you may encounter each and every one of them. Grieving is a complex process.
Not long ago as I was standing in line at a store, I heard a familiar twinkle. It was the ringtone that I had designated for my husband. For a moment my mind forgot as I searched through my purse for my phone. My heartbeat quickened and the butterflies stirred just like they used to in anticipation. And then reality set in as another woman answered her phone.
Those are the moments that reach out and beat you down. You're going along just fine - just an ordinary day and the next thing you know, you're sitting in your car having a good cry because you know that he can never call you again.
To me, grief is like a wave. You're never quite sure what the next one will bring.

Sometimes the wave is angry,

A wretched reminder of what was lost.

Other times the wave is gentle,

A blessed reminder of the past.

Posted by Connie A Thompson at 4:02 PM No comments: 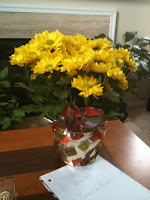 When I got home this afternoon, I was surprised to find these flowers at my house. My son and daughter in law had gotten them for me. The note reads Love you Mum.
I just thought this was so sweet. Sometimes you look back and recognize all the things you did wrong with your kids. As parents, we make so many mistakes and sometimes the I should have done this or I should have done that bear down on you.
But then there are special moments like this and you know despite it all - you have one great kid who happened to find an awesome wife. I'm so proud of them both. And I am thankful to God for such a wonderful blessing.
Posted by Connie A Thompson at 9:05 PM 1 comment: 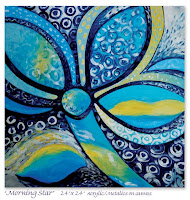 I went to the Women Of the Well conference here in Spartanburg yesterday. And all I can truly say is WOW. What a wonderful day for so many Christian women to come together. We were greeted with beautiful music performed by Gia Diamaduros and her praise band. The first speaker was Annette Moore who took us to the Samaritan woman at the well who met Jesus and learned of the living water. Next was Paula Rinehart talking about strong women with soft hearts. She is an amazing speaker. I can't wait to read her book. Charmayne Brown of Rejoice magazine blessed our food. Kristy Byers made us laugh. She is so funny and entertaining and what a great message she had about God being able to use us even when we're not perfect. And finally there was the wonderful music of Laura Story, who happens to have grown up right here in Spartanburg. It was such a wonderful conference.
Below are some websites of ladies that I met at the conference. Please check them out. And the artwork above is a picture by Sandy Thomson. She is such an amazing artist. Her artwork is so joyously beautiful and vibrant.
http://www.wowwomensconference.com/
http://www.sandythomsondesign.com
http://www.laurastorymusic.com/
http://www.rejoicemag.com/
http://www.paularinehart.com
Posted by Connie A Thompson at 9:35 AM No comments:

I Believe in Miracles

We've been doing the Priscilla Shirer's One in a Million study. It has been a wonderful experience and I have been learning so much.
In one of the lessons last week, the question was about miracles. Two of the answers were: God only did miracles in the Bible, and miracles are only for other people. It wasn't that long ago that I thought this was true. And yes, I do realize that they are in conflict of one another. But I did think that most of God's miracles had been performed in the Bible and the few that he still chose were done for "worthy" people.
On that fateful day in March while Mike and I sat in the doctor's office and essentially said a miracle was needed, well, let's just say that I didn't have much hope. And then things began to change. Everything that I read or saw was talking about miracles. There was a little glimmer of hope, but I have always considered myself to be a realist. My way of dealing with hard times is to acknowledge the possibility of the worse case scenario and then hope for the best. Back then, I did much more bracing myself for the worst. But like I said, everything I saw was giving me hope.
One day in the hospital, we met a chaplain. She had come to pray for Mike at my request. She spoke of healing and I countered with what about God's word? Her response was "God's will, it will be done, but it doesn't hurt to let him know what you want." And with those simple words, I had hope. And after that, everything that seemed to come my way spoke of modern day miracles. Mike went into remission — it was a miracle.
One day as Mike spoke to someone about his miracle, the man asked "but what if your cancer comes back? Did you really receive a miracle?" Mike's replied, "Everyday is a miracle for me. I'm not supposed to be here. According to the doctors, I should have died in April, but I didn't. That is a miracle that I live everyday. And one day, this disease will probably take my life, but he gave me more time than modern medicine says that I should have." And then Mike pulled out a copy of his ct cans. The first shows his cancer stricken body while the second shows his cancer free body. But one thing I really remember was the doctor's face when he saw the scans that very first day. I watched as he double checked the name and the information. He went back and forth across several screens of his computer reviewing and searching.
I asked this doctor later had he ever seen anything like what Mike went through. He told me he had seen miracles before. But in a case like Mike's; he had never seen anything like it. Whenever we would go in for Mike's checkups, his main prescription was simple - PRAY.
So my new answer in the study was, I have really experienced a miracle in my life. I believe in miracles.
Posted by Connie A Thompson at 7:17 AM No comments: