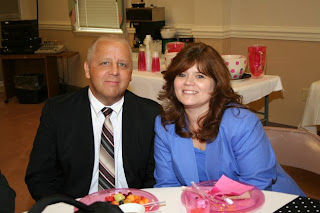 It is so hard to believe all the things that have happened in the last year. Last year, instead of taking the African trip we had planned, we found out that Mike had stage 4 lung cancer. The doctor’s diagnosis was grim last March. And then Mike had complications, which resulted in surgery. At one point, the doctor said he probably only had 10 days to live.

I prayed for God to give us as many good days as he could. Well, God granted us 336 days. And during that time we got married, we celebrated one more birthday, we had one more beach trip, we had one more trip to the mountains, we had one more Thanksgiving, one more Christmas, one more New Year’s, and one more Valentine’s Day. And on March 8 the Lord took him home. Mike had some pain on Thursday and Friday. But once they got him to the hospice house; they made him comfortable and truly took such wonderful care of Mike as well as the whole family.

The nurse that morning was also the nurse who had given Mike his chemo treatments. When Mike would come in for treatment; she would hug and kiss him and tell him that everything was going to be ok. What a wonderful approach to take with someone who is going through such trauma. She also informed us that she was a cancer survivor. She cheered Mike on every time he came in. She fretted over his losing weight and encouraged him to eat, eat, eat and drink, drink, drink (water). She suggested foods that would be tolerated well. She discouraged him from eating his favorite foods because they would not taste the same.

Sunday morning, I noticed that Mike’s breathing was not as labored and that his fever was down. I hoped for a moment that he was getting better, or that I might have a few precious good moments with him. Kim came in and I told her that he sounded different. And then with tears in her eyes; she told me he wasn’t getting better - his organs were shutting down, he was dying - she suggested that I call his family to come.

I sat by Mike’s bed side. I held his hand and I told him how much I loved him. I was scared. I couldn’t think of what to do. I picked up the Bible that Mike had given me two Christmas’ ago and began to read Psalm 23. His breathing became more shallow with each word. And as I read the last word, he took his last little breath. I felt the final flutter of his heart flutter. He was gone. This wonderful man that I married was gone. We only had a short time together. We had dated for a couple of years and we were married just a couple of days shy of ten months. It wasn’t long enough, but it certainly was wonderful. I will cherish the memory of every single day. I thank God for everyday that he blessed us with. Some might say that Mike didn’t receive a miracle because he died from cancer. But to us, everyday that we had was a miracle. We had 336 more days together.

Posted by Connie A Thompson at 9:17 PM