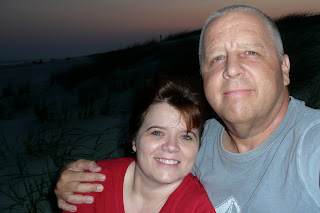 When Mike and I married, it was in between chemo sessions so we did not have a traditional honeymoon. A couple of months later, we went on our first vacation as husband and wife, and there was poor Mike on vacation with my whole family.

Sunset Beach, NC has been a favorite vacation spot for my family for several years now. This island called to me after the death of my mother. I walked the beach to the Kindred Spirit mailbox, which is tucked away in the sand dunes about a mile or so past the last public beach access. Inside the mailbox are pens and journals. It is a place where people come to share their joys and bare their souls. In 2006, I told the Kindred Spirit about losing my Mom. I also told the Kindred Spirit about this wonderful man named Mike, who I had met a few months earlier.

In 2008, Mike had just finished his chemo treatments and the doctor had declared him in remission. And while the doctor rejoiced with us, he also reminded us that this type of cancer would surely come back, but when he could not say. He encouraged Mike to go live.

Chemo drains the body of energy. My brothers were especially helpful, they understood the difficult time Mike had been through and they knew he tired easily. We were all surprised one day when Mike announced that he was going to play volleyball with them. He made me play too. I am not coordinated and my sweet brothers knew they did not want me on their team. They just knew they were going to whip us. Mike returned the serve easily and then he was running in the sand, diving for the ball, and keeping up with them. Others soon joined us and everyone wanted to be on Mike's team, which one the two consecutive games he played.

My brothers voted him the MVP and then laughed about carrying his beach chair down to the beach earlier that day. They didn't see the pain medication he took afterwards, but he had a smile on his face the rest of the week as everyone recounted his great volleyball skills. That was one of those great, unexpected moments and my brothers still laugh about how the old man with cancer whipped them at volleyball.

Posted by Connie A Thompson at 7:00 AM